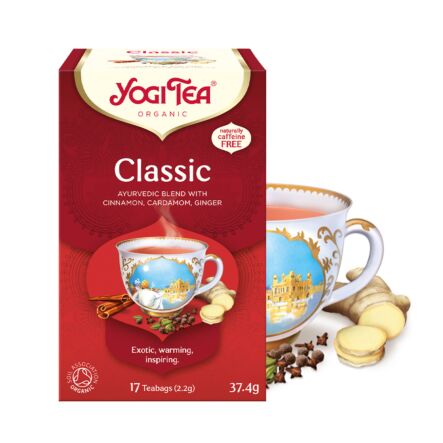 This is the tea that started the whole Yogi Tea adventure. It is made according to the exact same recipe for the tea Yogi Bhajan served to his yoga students and which became so popular that it later led to the founding of Yogi Tea.

This tea is the cornerstone of all Yogi teas, and is based on a classic Ayurveda recipe, with cinnamon, ginger, cardamom, cloves and pepper, creating a warm and spicy cup, full of exotic flavours.

You can enjoy this tea throughout the day without it spoiling your sleep, as it is naturally decaffeinated. What’s more, it is a healthy organic tea with ingredients that are all organically certified.

Try this warming and exotic tea that is good for both mind and body.

Yogi Tea was founded in 1984 in Oregon, USA, but can trace its history back to 1969, when Yogi Bhajan, from which the company takes its name, made an Ayurveda tea blend, which he served to his Yoga students. Today, Yogi Tea offers various types of tea, such as herbal, green, and black, as well as various tea blends, with a special focus on health and organically grown tea.

Write Your Own Review